I have a better idea of what my great-grandfather, William Cadwallader, did in his life than I do my other relatives. This is because he was a genuinely nice man who had a very good relationship with my father. He was invalided out of the war due to sickness. After the war he spent many years working for First Great Western and was also a part of the homeguard in WWII. But despite his uniform stripes I haven’t yet unearthed any information about this time in his life. But I will. Below is his medal roll card along with the information I have, and haven’t, discovered from it. 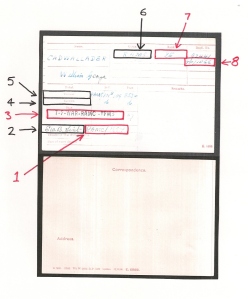 1). ‘RAMCf 1884’. I’m not really sure what this refers to.1884 could be a year or a reference.
2). ‘S.W.B. List’. My great-grandfather received the ‘Silver War Badge’ after he was invalided out of the war. I believe he contracted something like Malaria while serving in Salonika.
3). ‘T.P.RAMC.TFM3’. I think this must have been a medal specifically given to the RAMC, but I’ve been unable to find a record of it online.
4). The ‘British War Medal 1914-1920’ was handed out for a variety of reasons. They basically had to either have entered a theatre of war, or served overseas between 5/8/1914 and the end of the war (11/11/1918).
5). The ‘Victory Medal 1914-1919’ was given to personnel “who served on the establishment of a unit in an operational theatre” (National Archives), I understand this to mean that their unit was formed in the theatre, but I’m unclear.
6). The RAMC. My great-grandfather served in the ‘Royal Army Medical Corps’. We think he was a stretcher bearer but don’t know for certain.
7). I’m not very sure about this, but I think it reads something like ‘Jtw’. I’ve tried going through the list of rank abbreviations in the national archives but can’t find anything even remotely similar.
8). I’m not sure whether this number is part of his regiment’s number, or whether it is the number of the regiment I believe my great-grandfather was embedded in.

Luckily I also have a copy of my great-grandfather’s sign-up sheet, but it doesn’t give any extra information that would help me explain the mysteries on this roll card.

View all posts by Julia Smith

This site uses Akismet to reduce spam. Learn how your comment data is processed.